A Little March with Big Repercussions 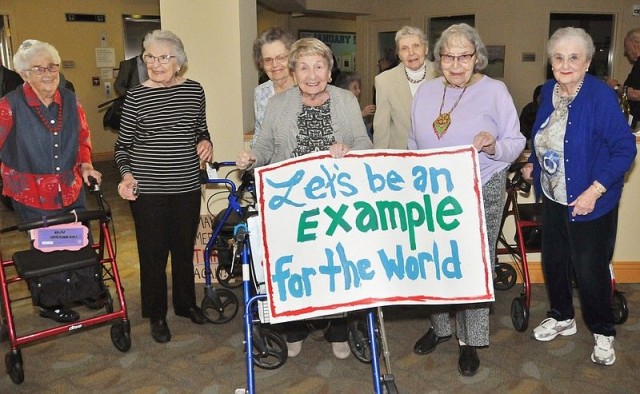 Leslie stood with the thousands of women in D.C. on January 21. Many of our friends marched in St. Paul and other cities across the U.S. Perhaps the most unusual march that day occurred at our mom's independent living home in Encinitas, CA where fifty women from 80 to 102 years old staged their own "little march."

At Friday night dinner, one of Mom's feisty tablemates, Dee, announced that she was helping organize a march for Seacrest residents because "we're still part of the world." Dee circled the dining room with her walker announcing the event—a little march in the lobby complete with posters. It would be a march to let the world know how Seacrest residents felt about the election and their concerns about the direction the country might take.  But, Dee assured everyone the march was not meant to cause divisiveness in the Seacrest community. Civility and tolerance would still prevail at Seacrest.

By Saturday afternoon fifty women holding placards appeared in the lobby, some accompanied by daughters and granddaughters. They marched. For some this was a first, for others it was a continuation of their life's work to make the world a better place for all. Alerted to the newsworthy march, the local NBC TV station appeared and interviewed five of the residents and one resident's granddaughter. You can see the report for yourself through this link. (http://www.nbcsandiego.com/news/local/This-is-a-Little-One-Seniors-Walk-in-Solidarity-With-the-Womens-March-411446085.html)

Considering the time limits of local news, it was a good report. Left unspoken were the harrowing life stories of some of the women especially Alice's biography, the woman who first proposed the idea. Alice had street cred in the discussion about immigration and refugees.  As a Jewish refugee from Vienna after Austria was annexed by the Nazis, she was not only uprooted, but searching for a place to exist.  At that time America's immigration was also closed and the State Department was deaf to Jewish pleas and it was not until after World War II that she immigrated.

For those who marched, it was exhausting and exhilarating. Now that we're three weeks beyond the march, the Seacrest women have not let up. They have taken up their pens to write their congressmen. This time KPBS radio was on the scene to interview the women in more depth. http://www.kpbs.org/news/2017/feb/14/weve-come-too-far-go-back-say-elderly-activists-pr/

Listening to the voices of women who really know the world and hearing their resolve to remain a force within it energizes me. Each woman's story includes a history with the issue of immigration, women's rights, and discrimination. Not one of them is embittered by their past but each woman has resolved to fuel her present and seek a fair and just society for future generations. The TV and radio reports may also change your mind about aging in America.

The Wildest Inauguration Ever