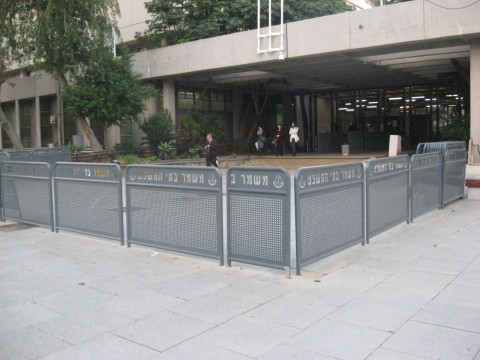 In general I'm appalled by bucket lists.They are reminiscent of "to-do" lists:get dry cleaning, go to Target, climb Mt. Everest.Still, I admit to one life goal before I kick the bucket.I want to watch my son try a case in court and quietly kvell inside.

Traveling in Israel presented me with the chance to partially fulfill my great desire to sit in a courtroom as an observer.Each time I've traveled to Israel, unique experiences pop up in front of me like dandelions on an untreated Minnesota lawn.

While at my cousin Noam's 23rd birthday dinner, he mentioned he and his partner Gal was suing Air France the following week. They had tried to appeal to Air France for compensation for being stuck without food or bathroom privileges for over three hours at Charles DeGaulle Airport.Air France declared that as Israelis and not EU citizens, Noam and Gal were not entitled to compensation. As Noam and Gal emphatically sketched out the details of their misadventure, their intensive research process, and their systematic strategy for court, I couldn't resist asking, "can I come?" Noam didn't hesitate and quickly responded, "It'll be such a good show, I could sell tickets."

This was perfect.I have my own axe to grind against Air France and their alleged partner, Delta who cast blame on each other's computer systems for losing my reservation from Paris to Tel Aviv.I can see a court case with Noam and Gal arguing before a judge. If Air France loses, simultaneously I can enjoy their victory and vicariously revel in Air France's punishment.

My cab ride to the HaShalom Court in Tel Aviv deserves a blog on its own, but after a prolonged inspection of my "antique cell phone" by the soldier on duty checking bags at the court, I did squeeze into a seat in the claustrophobic courtroom next to my cousin, Giora. Noam and Gal nervously awaited their chance to present their case against Air France.Papers were carefully arranged on the table and I could see Gal's carefully organized notes.

Within a minute or two, the judge entered the room, his knitted kippah slightly askew.We all rose, he sat, we sat.So far it was just like TV courtrooms.Since it was small claims court, the plaintiffs could present the case without a lawyer and the respondents do the same.The judge explained the rules of the proceedings. I had to adjust my brain and my ears to listen carefully to courtroom Hebrew which weaves in many Aramaic phrases from the Talmud. Before long, Gal who is assertively a secular Israeli lapsed into a Talmudic singsong and hand motions as he presented his case.The judge responded in kind.

The scruffy Air France representative didn't have much of a case or very persuasive arguments.She insisted that Air France had served muffins during their three hour plus wait on the tarmac and she asserted that Air France kept people on the plane so they could get to Miami in time for Rosh Hashanah. The judge didn't seem convinced by her contention that Air France was committed to landing before the sunset deadline for a Jewish holiday so it was best to keep their passengers seated on the plane and ready for take-off.

Although Gal and Noam didn't win a conclusive victory against the airlines, the

judge spent over one hour carefully listening and posing questions to both sides. Once the two parties exhausted their arguments and counter-arguments, the judge took the time to explain how he would decide on the amount of damages and why there has to be a limit.Again, it reminded me of a Talmudic discussion of damages.

The judge's final question—he asked who all the people were in the audience and how we were connected to the plaintiff and respondent."Welcome, I'm not used to having so many visitors here," he proclaimed before leaving the courtroom.

Gal and Noam eventually learned that they had won a judgment of 3500 NIS against the airlines. That's substantially more than the stipulated EU damages--€400. I thought the victory far exceeded the amount they received. They presented their case with self-confidence (albeit with fevered emotions) and they were heard. Like other Israelis of their generation, they stand up for their rights.

Now I have two items on my "to do" list—challenge Delta and Air France over my "lost" reservation and witnessing my son argue a case in a US court.I'll miss seeing the menorah over the judge's head.Enter your text here ...