From Farm to Table into our Hearts 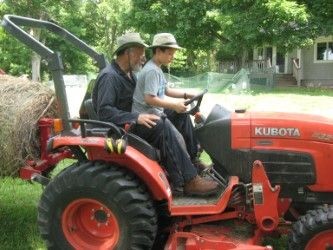 "It was the best trip ever," gushed my grandchildren as we were driving back to Minneapolis from Omaha. Like you, I hadn't considered Omaha as the number one vacation destination, but my grandchildren were correct. You don't need me to tell you the top ten tourist destination spots in Omaha, but read on to find out why visiting Cousin Mike and Jodi and their family on their fifteen acre farm in the Nebraska summer heat and humidity was a dream vacation.

Mike and Jodi farm just outside of Omaha and wrangle nine ducks and two geese along with their bees.By the first morning when Jodi invited my grandchildren to help move the ducks from their house to their outdoor living area, they were enchanted.Jodi explained the behaviors of "her girls." The children hung on every word and dedicated themselves to finding dandelions treats for the ducks and seeds for the geese.When it was time to pick raspberries, they ignored the heat and humidity. Proceeding along the stately raspberry plants, they carefully judged which were ripe enough to go into their containers.By the third morning, they "drove" the tractor with Mike.

Our last evening was spent at a local Italian restaurant where Mike and Jodi's produce is featured on the menu. Both grandchildren chuckled when they spotted "Fruit of Levine" (www.fruitoflevine.com/) listed as one of the growers on the backside of the menu. Seeing the amber honeycomb together with the black raspberries and tasting them in combination with the ricotta cheese and toasted bread was pure delight.

We stayed with Mike's daughter and her partner in a comfy mother-in-law apartment in their home.Three cats and a dog with a wardrobe and a hairdo completed the family. Tentative conversation during the first encounter between our grandchildren and their newly discovered cousins gave way to casual chatting about the complicated relationships among the resident pets.

Mike and Jodi are passionate about farming and raising their ducks and geese. Whenever we sat down at their table with both Mike and Jodi's daughters and their daughter-in-law to be, we could feel their happiness and contentment.

Farmers have to be optimists.They have no control over the weather, the pests that may stalk their plants, the diseases that may afflict their animals.

Jodi and Mike are planners and their library at home reflects their dedication to understanding the best practices of farming.They are innovative.They asked restaurant owners what specialty produce they would buy to ensure their crops were in demand.

Mike and Jodi each spent many years in similar situations over which they had no control.They both cared for tragically ill spouses while trying to earn a living and parent a daughter at the same time. They faced the cruelty of the death of their spouses. They both look at the genetic make up of their daughters and worry.Not long after Jodi and Mike met, Mike had to undergo a

Heart bypass .Once they married, it took time for their daughters to become sisters and for each to accept a new parent. And then Mike and Jodi decided to pursue their fields of dreams and become farmers.

Witnessing their happiness and the conviviality of everyone at the dinner table every night we were in Omaha, brought tears to my eyes.We were sitting at our grandparents' old claw-footed dining room table that has groaned under the weight of Levine feasts for decades and I could feel our grandma smiling.

"This is what matters."

Part III: In Places I Don't Belong
A Visit from Baubie While Shelling Peas