Invite Jewish Luck to Your Seder 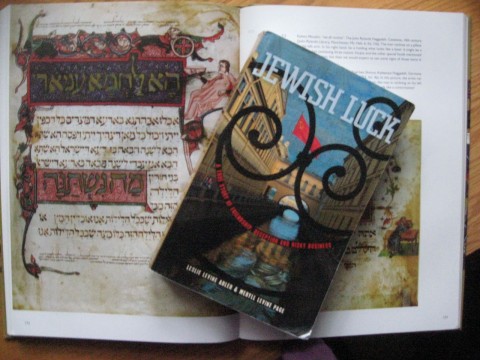 Every year, I make the exact same foods for our seder but try and create a new experience when we retell the story of the Exodus. Since my return from Israel and the gift of the Schechter Haggadah, I have been considering new themes and approaches.

There's still time to read Jewish Luck before April 22. I I can assure you that there are strands within Jewish Luck that will help you convey the themes and feelings of Pesah. I remember the year that Vera's son attended our seder and we read a section of the book to him emphasizing the notion of "in every generation…"Although you can't invite Vera, Alla, or Lev to your seder, here are four ideas (in keeping with the repetition of the number four throughout the seder).

Food as a symbol

The rabbis were wise to include food symbols in our seder-the shank bone, the roasted egg, the parsley, haroset, bitter herbs, salt water, wine, matzah.What better way to concretize a memory than to see, smell, and taste it?

For Alla (chapter 12, p. 86), her grandmother's commitment to creating Passover foods like gefillte fish and serving matzah was etched in her memory.One of her first acts of freedom from the USSR was attending a seder in Stockholm.Think of the V'he she'amdah section of the haggadah when we lift our cups and proclaim, "there was not just one who stood against us to destroy, but in every generation there are those who would destroy us."For Alla, Vera, and many other Jews who lived under the Soviet regime there was no question that the government intended to erase their Judaism.But for Alla, gefillte fish became the glue that bound her to her Jewish people.

Let All Who Are Hungry Come and Eat

Early in the seder we lift the plate of matzah, open the door and invite in all who are hungry and need a place for seder. Many of us fulfill the mitzvah of ma'ot hittim—giving money to those who need it for Passover supplies well before the seder has begun. Many also invite those who don't have a seder to their own table in advance of reciting ha lahma anya, "this is the bread of affliction." An underlying theme of the seder is that having been slaves we should understand how the downtrodden feel, we need to act to help others.In a very literal way, Alla was one of those downtrodden invited to a seder in Stockholm (chap. 26, p. 197).That invitation meant freedom to her.For Vera, the idea that one helps others was a constant in her business practices.She opened her arms to her employees creating a family around her and caring for their needs even if she was sometimes betrayed. (chapter 31, p. 230-231).

There's no need to mention the role of the exodus—the quintessential journey from slavery to freedom—in the Passover story.It is the story. And the journey was long, forty years of wandering.

Both Alla and Vera journeyed  from the slavery of living under Communism to the freedom of living in an open society. Like the Israelites, they didn't feel free overnight.Their journeys were fraught with dangers and fears.Many of our immigrant parents or grandparents followed a similar path.

It may seem ridiculous that the Israelites look back longingly at their food rations in Egypt while they were in the desert, but the unknown is a terrifying place to be. The wilderness of Sinai is not so different from the unknown territory that lay before Alla when she docked in Stockholm or in front of Vera as she negotiated the new Russia and, later, a life outside her homeland.

Elijah is the precursor of the Messiah, the embodiment of hope.He appears at our seder and as a guest at a circumcision.No matter what the circumstances of the present day, we look forward to the future and we work to bring about a better world.

Hope paired with determination sustained both Alla and Vera through the hardest of times.Vera suffered from the jealous attacks of business rivals and the hard life of the USSR robbed her parents of their health. Alla's emigration meant years of loneliness until she was able to reunify her family. Both had hope that they could create a better future. Both did.

Hag Sameah—a very enjoyable Passover to all our readers and to Vera and Alla and their families.