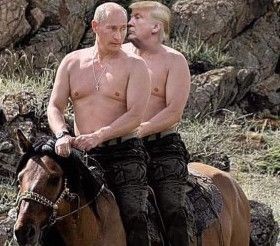 Leslie emailed me this photo that was originally on Christopher Diaz's Facebook page. We both found it an amusing riff on the mutual admiration Trump and Putin have declared for each other. We find the photo increasingly disturbing and we're not the only ones. There has been a spate of op-ed pieces that castigate Trump for his Putin-o-philia. Wiser political minds than ours have warned about the dangers of underestimating Putin's cunning.

In today's Minneapolis Star and Tribune, a New York Times article by Andrew E. Kramer catalogues the Putin critics who have been silenced by murder.

Like other Russian leaders who preceded him, Putin is not leaving the Kremlin by night with a poison dart to slay his enemies. He's an executive. He knows how to delegate. Leslie and I have written about Putin's vicious attacks on specific targets like Boris Nemstov and many of the underhanded tactics he uses to retain and enlarge his power.(See a list of some of our blogs on this topic at the end of this blog).

For those who have suffered from Putin's self-aggrandizing and repressive regime--from journalists to residents of Crimea to average Russian citizen-- this is not news.

As Americans, our simple question to Russians is: why not elect someone else? That is precisely the problem. Once someone like Putin is elected by promising to make Russia great again and by subverting democratic processes, it's no easy task to unsaddle him from the seat of power.

Inadvertently, I saw the same message last night in a film entitled The Fool produced and directed by Yuri Bykov. This 2014 movie recounts a straightforward tale familiar to many Russians. Bribery and corruption has led to an impending disaster for the tenants of a forty-year-old building with an immense crack that runs the height of its nine stories. One can see the stones falling away from the foundation and the building is literally tilting. This building is home to the bottom of Russian society, those who haven't struck it rich in the new Russia. Money allocated for building repairs and inspection has been embezzled by the city department heads.For Russians, that's not much of a shocking revelation. It's a validation of all that they believe to be true. Bribery and corruption are business tools and an incentive for becoming a government official. What's shocking in this film is the protagonist, Dima. A plumber's assistant, Dima is convinced that he can persuade the government officials to evacuate the building and save the over 800 residents. He is "the fool" in the film. No spoilers—see the film to see what happens to a moral person in contemporary Russia.

In many ways The Fool is also an allegory. The building with the visible foundational crack about to tumble is the Russian system. All the self-important big shots have wedged deeper and deeper grooves into the crack. The governed have begun to behave like the leaders. Stealing, drinking, harming others is the norm. The opening scenes in the apartment building look like an illustration for Hobbes's belief that life is "poor, brutish, and short." As Mayor Nina Galaganova tells her lackeys, "Рыба тухнет с головы." (A fish rots from its head.) Those who have to flee are the people with a heart and a sense of right and wrong.

Could Trump turn the US into the mire that is current day Russia? Probably not. We have a strong democratic tradition and a history of correcting towards the political center. But what is troubling in the silly photo-shopped picture is a would-be American leader who mimics Putin (make Russia great again) and admires Putin's strength. Please notice who is holding the reins of the horse in the photo.

Our mom shared one of the many op ed pieces that appeared recently. In this one Peggy Noonan from the Wall Street Journal (http://www.wsj.com/articles/the-week-they-decided-he-was-crazy-147035403) used the word "kakistocracy" meaning government by the worst people, by the least qualified or the most unprincipled to describe a possible Trump presidency. Although our democratic structure may save us from an autocracy under Trump, it can't prevent a kakistocrat from inauguration. Do we really want the least qualified and the worst among us to represent us? Trump's admiration of Putin is reason enough to slap the kakistocrat label across his naked chest.

Our job is to do everything we can to make America think again. Let's prevent the word kakistocrat from replacing the much more American word, President, and keep our chief executive modeling herself after the likes of the world's leaders whose concerns are the welfare of their citizens, their country, and the world.

A selected list of previous blogs from www.morejewishluck.com on Putin

Tags:
Putin and Trump The Fool kakistocracy Putin and the Kremlin critics A fish rots from his head
Thoughts from Costco's Cereal Aisle
September Book of the Month-- Stalin's Daughter: ...