Leslie and Meryll Buy a New Car But Who's Driving the Decision Making? 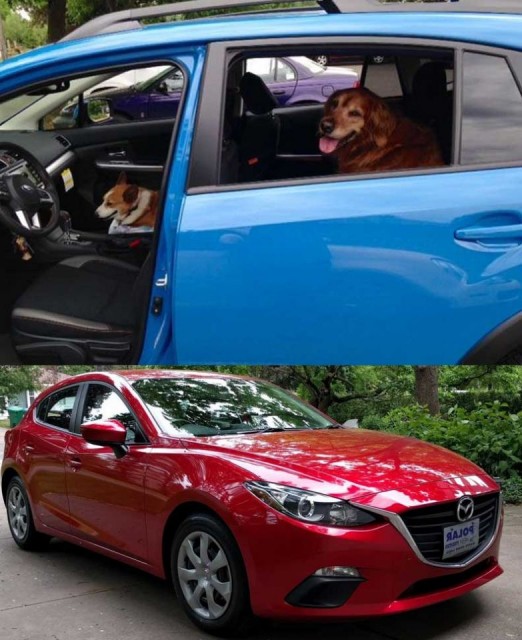 For weeks Leslie and I have known that driving our Subarus was risky business.  Last week, Leslie’s car sputtered its last on a busy freeway.  Fortunately, her trusty Corgi, Steve, accompanied her so no panic. She learned the value of paying attention to the oil light much too late.  Don’t drive like my sister.

My situation was less dramatic, but I knew my poor, battered Subaru would soon be ready for a complete internal makeover.  Our mechanic had already sounded the warning note accompanied by a hefty estimate for all the work to keep the car in working order. I decided to act before I, too, was stuck on the side of a Twin Cities freeway.

The purchase process was far different than my worst car buying experience in the 1980s when I entered the Toyota dealership, and the salesman asked, “where’s your husband?”  Then, I walked and drove to the Honda dealership with a seasoned salesperson named Ruth.

Leslie began at the same Subaru dealership where she had purchased her previous car.  After all, Subarus are made with love, and one saved her life.  This was her fourth.  She liked her salesperson, Ross, and was awed that although he was Jewish, he was making his college-age son pay his own airfare to attend the graduation of his brother.  She’s still trying to ease her 28 year-old off the family phone plan.

This car would take her from age 60 to 70 so she opted for the car with eyesight. If she loses her vision, it can drive itself. An electric shade of blue was a must even if it meant driving it from another dealership 200 miles away.  It was worth it so she could locate it in a parking lot. In fairness, the oil light debacle followed her progressive desensitization to the warning lights in the car, since they lit up regularly in all of her Subarus after the 8th year and generally meant nothing, except for the OIL LIGHT.  She bought her car quicker than I can purchase a dress and without disturbing her busy husband, because his school was having an upcoming fundraiser.

I started with research---not Jewish Luck kind of research where I read every article on cars.  For automotive research, I shortcut the process by asking my older son, “what do I want to look at?”  He provided me a short list with makes and models and then I began the winnowing process.  I had a lot fewer candidates to examine than the Republicans had for their primary season.

My son also knows the most hassle free way to buy a car—Costco. If they sell great salmon and sox, they can also sell cars.

And yes, I ended up at the same Subaru dealership as my sister. Two days later I was at the Mazda showroom for comparison and then came the decision-making.  Both cars drove fine in our lovely summer weather with dry roads.  In the end, I chose the less expensive of the two. The difference equaled the cost of two airline tickets to Israel, my personal unit of currency.

Leslie and I were less interested in technical stuff like engine displacement or anti-lock brakes and more interested in talking about our thoughts as we bought our cars. Leslie’s thoughts turned to Vera’s question posed on every visit to Minneapolis. “Why don’t you get a new car?” A few dents and scratches and a scruffy interior may be distasteful to Vera, but Leslie, like me, is more concerned with the inner car.  Leslie called Vera eight days after her purchase and told her to quickly come look at her new car before it got dented or dirty.  Unfortunately, Vera is in the Caymans so maybe Leslie will skype Vera from her car.

I anthropomorphized my old car while shopping, thinking of it as “Little Red.”  It looked a bit like a used up boxer—one eye (i.e. head lamp) bruised, battered ribs (fenders), and failing internal organs.  Somehow everything these days can remind me of aging.  Shopping only underscored the reality of the aging factor.  By the time I finished I felt like I was a certified old person.  New cars come with blue tooth—to me that sounds like a dental condition.  The radio looks like an airplane control panel and all I want is public radio!  Books on CD—not any longer.  You can’t drive off the lot without intensive training on how to use all the gadgets in your new car.  I wonder ifbuying a model T left new drivers with the same feeling.  That crank on the front—so new fangled!  Easier to ride my horse.  This is probably the last car that I will buy so I have hopes that as the years pass I’ll figure out how to work everything.

While Leslie and I consider a car a mode of transport, I know that for many people their car represents who they are.  My six-year-old granddaughter thought my car should be red with pink wheels.  Clearly for her it’s a fashion statement.  She did ask, “Are you buying a sports car?  If you are, will you have basketball and baseball decals on the outside?”  Good question.

Leslie and I are both content with our shiny new vehicles.  She believes we learned our decisive shopping skills from our dad. Leslie has a brand new blue car that reminds both of us of Dad’s eyes and I am driving a red car that reminds me of Dad’s indomitable spirit. Thanks, Dad, for making us such competent decision makers, and for teaching us not to look back, that is unless we’re checking our blind spot.

Leslie
28 June 2020
Earthquake
Wearily, I don my mask, my gloves for the weekly drive from my Minneapolis home to my suburban office to collect my mail. My footsteps echo in the empty hall. The calendar is still turned to March 2020 which means I have spent less than three months in this space that does not yet feel like my own. The March calendar photo of Little Paradise, New Zealand reminds me of my visit to an exquisite plac...
Read More