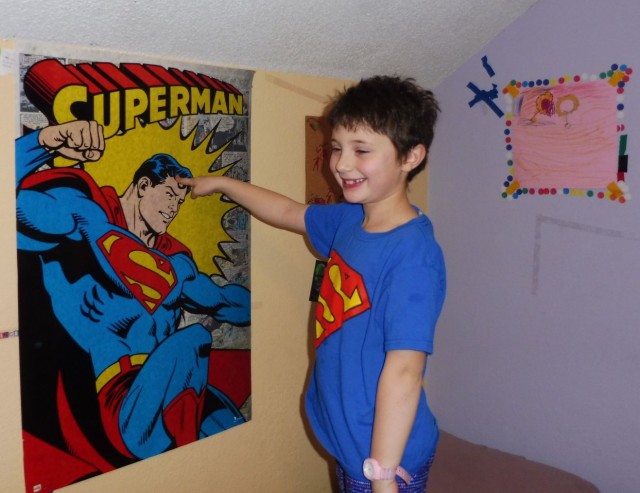 Superman has enthralled my seven-year-old granddaughter for months. A Superman poster looms over her bed. Superman T-shirts supplant Hello Kitty shirts. The doll house sits as if on a vacant lot in her room while action figures and an array of graphic novels for little ones (aka comic books) dot her floor-scape.

When I ask her why she likes Superman, she tells me, "because he's superman. "A seven year old can't be expected to understand a tautology so I'll have to dig a little deeper to discover the source of his appeal.

Perhaps you, too, were drawn into the embrace of superheroes when you were little.My grandson was enmeshed in the whys of the natural and mechanical world.It was all so wondrous that he had little patience for superheroes in flashy outfits.

While I was glued to the TV set when George Reeves's Superman burst onto the small screen, it was Peter Pan who stole my imagination.I spent hours jumping off our front porch in an attempt to fly.Apparently my parents neglected to read me the story of Icarus. What are our boundaries as humans?Leaping beyond our human bonds seems to be a shared desire.But the attraction of superheroes seems to go beyond the desire to acquire superhuman power.

Last Monday my granddaughter invited me to her classroom to share a Jewish folktale at her Quaker school. Immediately The Golem popped into my head, the version striking illustrations by Beverly Brodsky. I wasn't too worried about frightening first and second graders, but I decided to delete the blood libel accusation and substitute more general anti-Semitism as the pretext for Rabbi Loew's decision to awaken the Golem.

"Who likes superheroes?"Every hand popped up when I asked the question. Forty squirmy bodies sat still as I read the tale, their eyes mesmerized by the paintings as they listened. While they might not have understood every word, they immediately grasped the fear that gripped the Prague Jewish community when threatened by mob hatred.The community was saved by the Golem, and the children relaxed into relief. Rabbi Loew closed the story of the Golem by laying him back to sleep in the genizah of the Old-New Synagogue.

As I prepared for my debut in my granddaughter's classroom, the parallels between the Golem and Superman's creation didn't escape me.I included the real-life story of Jerry Siegel and Joel Schuster, the two Cleveland high school boys who dreamed up Superman in 1934 during the Depression.It was a time when Jews, especially immigrants and their children, were outsiders.When Jerry was in junior high school, his father died of a heart attack following a robbery in his haberdashery shop.No superhero or everyday hero intervened.In creating Superman, Jerry awoke the Golem, fashioned him to fit 20th century America, and put words in his mouth once again.In Jerry and Joel's original tagline, Superman fought "in the interests of truth, tolerance, and justice."*

Like Jerry and Joel, children seem to understand that when they are afraid, they can turn to their imaginations to create a sanctuary.And they, too, can be superheroes when like the Golem or like Superman, they fight for truth, tolerance, and justice. One is never too tiny or too young to sport a capital "S" on one's chest or the Hebrew word אמת (truth) on one's forehead.

* Many of you will remember Superman's tag line on TV: " truth, justice, and the American way."At the height of the Cold War and the Red Scare in the 1950s, the tagline was changed substituting Siegel's original word, "tolerance" and for "the American way."To give the Soviets equal time, they too had their share of superheroes like Tutarinov, the Cavalier of the Golden Star.Of course, in Soviet superhero-dom, it was their commitment to Communist ideology and surpassing Soviet production goals that marked them as heroic.Enter your text here ...