"We are all Migrants in Time"--Mohsin Hamid in Exit West 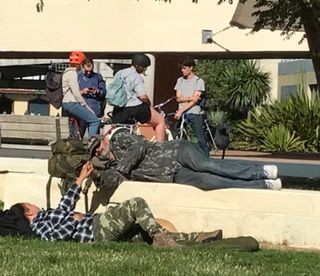 A story within a story by Mohsin Hamid of an old woman who lived in the same home since childhood through two marriages and children growing up and wandering on to find their own lives inspired this blog. Mohsin's character is old now, and no longer knows her neighbors for the homes are populated with people who move in and out, many who don't speak the language, are far younger, and don't have her history of place, and; yet, she feels herself to be the migrant.

Forty-one years ago, on the streets of Leningrad, when I started my friendship with Vera, a Soviet Jew (yes, this is an oxymoron),I felt that I was the one with a stable home, grateful for my place in the U.S. and the freedoms it gave me. I felt that Vera was trapped in a place she wanted to leave, but would never do so without her parents, whose presence and love gave her the sense of home.

Home feels unstable to me now, as does freedom. Vera has become at home in the world – in St. Kitt's, on Grand Cayman, and in Tel Aviv. She is free to explore the world having worked so hard for her wealth and security and wisely invested it in many of the same places as some of Trump's cabinet, no doubt. Alisa, too, is a citizen of the world commuting between London and Sweden with many trips to developing countries in the Southern hemisphere to promote telecommunication so our world becomes even more connected. Both now have a bird's eye view on the world. Both are far from the "bubble" that used to enclose Soviet citizens in an insular world where Soviet citizens were supposed to know only what the government wanted them to learn.

Now it's my turn to feel that I am in a bubble – a bubble that is promoted by the administration as it turns the truth in the way that benefits our leader and his oligarchy the most. Even when the press does its job, there is such a morass of confusion to push way in order to get a hint of truth. The truth, now as it is and was in Russia seems to be formed by layers of intrigue, which not even our best spy novelists would dare to concoct.

Recently,  following my twenty-five year-old "runaway bunny" to New Zealand to check  on her after five months, I felt that perhaps she was leading us to a peaceful place where coexistence of many different minority groups was so taken for granted that it became irrelevant, unless one was Maori with a long history of persecution, not unlike our Native Americans. In New Zealand people seemed to care passionately about their environment, their quality of life, and each other. As a visitor, I found this peace and acceptance of lifestyles enviable.There was no pretense in Wellington that I could identify – pretense was unnecessary. I found myself wondering if this could be home – a thought I never before had imagined. Or, maybe I should remain at home, protest, stand up with my peers for the United States that seems to be slipping away edict by edict. Nicholas Kristof in his Thursday NYT column indicated that Trump supporters also feel that they are marginalized and alienated (note the root of that word). How do we make a country that can be welcoming to all of us – migrants from afar and migrants through time -  and preserve the beautiful ideals engraved on the Statue of Liberty?

Mohsin Hamid, your book is about individuals who are struggling to find the hidden doors in order to survive, and, in each place they are challenged to find refuge and safety. What if it were us?What if we consider that they are we and we are they?

Meryll just informed me that I wrote a Passover blog since one of the themes of the seder is to connect the we and they. Our seder begins by opening the door inviting all who are hungry to come in and eat, and all who are in need to share the celebration of Passover with us. Our seder closes with the opening of the door again to ask the prototypic migrant through time Eliyahu (Elijah) to bring us peace, redemption, or whatever we consider the essence of a completeness – sh'lemut.

David Moss calls these "the doors of paradox." Jews know a lot about being migrants through time.

"We have nothing to fear; we have everything to fear.We are a chosen people; we are a despised people.And the door is the ideal symbol of that always unsettling, primary and intuitive knowledge deep within every Jew of what 'Jew' means to Israel.For the door is the interface, the threshold, the meeting place between the inner Jewish world and the outer non-Jewish world.How it opens, when it opens, when it closes has in a sense created Jewish history. (David Moss, The Moss Haggadah, p. 53)*

We wish you all a meaningful seder and hope you open doors throughout your journey.

"This year we are slaves. Next year we will be free men and women." But only if all are free.

Tags:
migrants Seder ideas Mohsin Hamid Exit West We are all migrants in time David Moss haggadah
How Do We Record Memories
Alisa's Birthday and the Siege of Leningrad