Author of the Month: Ben Mezrich 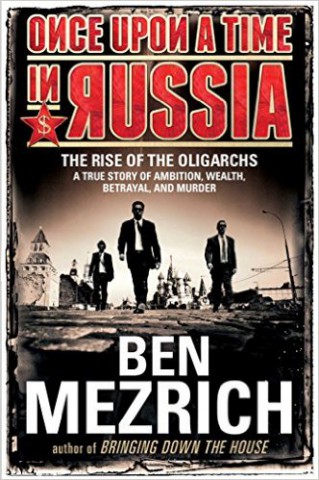 Once Upon a Time in яussia.The Rise of the Oligarchs-- A True Story of Ambition, Wealth, Betrayal, and Murder by Ben Mezrich.New York: Atria Books, 2015.

When I heard about this book, I knew I had to read it.Mezrich's title is even longer than our own and you can see the parallels to our title, Jewish Luck: A True Story of Friendship, Deception, and Risky Business.One has to emphasize the book is a true story, because tales of Russian business and politics strain credulity.

Mezrich draws  the curtain on the behind the scenes workings of both the post-Soviet business world and the government.Vera (in Jewish Luck) likened the atmosphere to the Wild West and Mezrich's account further develops the analogy.

For those of you drawn to our account of Vera's business travails and successes, Once Upon a Time in яussia will be a sequel in bizarre business. Mezrich focused on a hyper successful businessman who also came from a Jewish background—Boris Berezovsky.Like Vera, he began with a modest business reselling cars and expanded to control a media empire.Unlike Vera, he did not cultivate a true friendship that sustained him throughout his life. His so-called friends ended up disappointing or betraying him.

Mezrich succeeds in delineating precisely why Berezovsky is called an oligarch, one who is more than a very wealthy and astute businessman. Berezovsky entered the treacherous waters of post-Soviet politics assuming that whomever he backed would have his back in return.Not true when the politician in question is Vladimir Putin. Some oligarchs who used their wealth to try and influence government and politics ended up imprisoned like Mikhail Khodorovsky.Berezovsky's life ended in exile and loneliness.While not exactly penniless in London, his deflated wealth leaves him only memories of his past high-flying life.

Mezrich's prose is fast-paced and colorful.Those of you who claim to only read fiction, should test out this book and see why the platitude "truth is stranger than fiction," exists. Despite the Russian terms (which are sometimes written in Cyrillic), the tongue twister Russian names, and the complex intrigues at the heart of the book, it is an engaging book to read.Don't miss reading the acknowledgments where Mezrich describes the origins of the book.I would have liked to know more about Mezrich's own research adventures, but I also understand that Mezrich's sources could be endangered by further revelations.

When my husband, Chris Page, saw Ben Mezrich's book on my nightstand, he exclaimed, "I see you're reading a book by my former astronomy student from PDS." So, Ben, Mr. Page remembers you as "energetic, bright, and stellar—"

How Do We Know What We Know? (TOK)
What's in your pocket? Seasonal Reflections