Author of the Month: Dan A. Oren 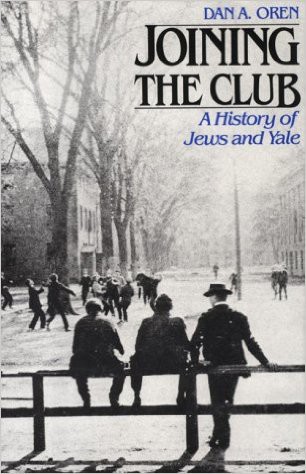 Dan A. Oren's book, Joining the Club:A History of Jews and Yale has nothing whatsoever to do with the Soviet Union. Leslie and I are bringing our readers along on one of the tangents we pursued while researching for Jewish Luck.

As we were writing and discussing the quota system that blocked Vera and Alla from attending Leningrad State University, Leslie commented, "It's something American Jews didn't have to face."Whew--Leslie did not expect my heated response, "Are you kidding me?"

Although I didn't face quotas when applying to college, my memory of the discussions by my uncles when they applied to the Ivies in the 1950s was clear.I also remembered reading about an informal quota system that the Ivy League colleges subscribed to.Urban legend reported that admissions directors became proficient at ferreting out Jewish candidates limiting the admission of Jews to about 10%. I was also aware that my own college prep school appeared to maintain a "balanced" class wtih no more than two Jews and no students of color until well into the 1960s. I grabbed Oren's comprehensive history of anti-Semitism at Yale and other Ivy League schools to fact check.

Oren is neither a historian nor a statistician, but an associate professor of psychiatry at Yale.I scanned his book for the relevant information but, like Stephen Lovell's book on the Russian dacha, I couldn't help but read Oren's book from cover to cover. I was drawn into the book as if I were a fourth grader immersed in my first Nancy Drew.

His research is meticulous. He combed the documents in the Yale archives that include letters and records not previously available to researches.Each quote from administrators, professors, Yale students, and donors illuminates the attitudes of the times. And, indeed the document entitled, "Limitation of Numbers," was the admissions office's 1923 initiative to keep Yale the preserve of gentlemen. Oren traces not only the discriminatory policies of student admission that flourished between the world wars, but also the discrimination practiced by Yale professors who turned away qualified Jewish professors with the same disdain for their "ungentlemanly" ways that the admissions officers evinced for prospective Jewish students. Not until 1946 did a Jewish professor receive a tenure track appointment at Yale College.

Yale deserves credit  for opening its archives (one folder was labeled "Jewish Problem"), for publishing the book, and for promoting it despite the unflattering portrait.What began as a sophomore term paper has become a valuable window into the prejudices that pervaded upper class America  for approximately seventy years.

By the time I entered Yale in 1969, there were over 100 students eating in the kosher kitchen. About 25% identified as Jewish when they registered, but the number of Jewish students was probably closer to 30%.It was a campus where anti-Semitism had become a forgotten memory.Dan Oren reminds us that when we Jewish students arrived on campus in 1969, the battle on our behalf had already been fought beginning in 1960.Oren briefly mentions the struggles of black and Hispanic students, but it remains for others to document their encounter with the Yale culture.

Do We Really Need Another Putin Biography?
Baubie Shoes