Author of the Month: Stephen Lovell 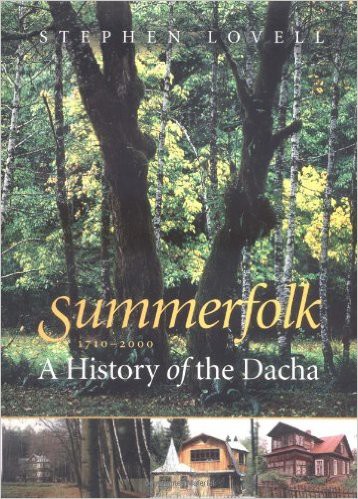 Summer in Minnesota means a trip to the cabin for many locals.  Even for those of us without a lake cabin, we sense the weekend’s rhythm as the roads leading north thicken with traffic on Friday afternoon, Costco is mobbed with people stocking up, and lines at the gas station snake well beyond the pumps.  Our local newspaper features an article every Friday written by subscribers extolling their cabin's virtues.

Similarly in Sweden, families weekend away from the city on one of the many islands that dot the Baltic or in the woods in parallel fashion to Minnesota cabin owners. Sweden boasts 600,000 summer cottages. We interviewed Alisa’s friend Lena on a Sunday evening as she returned from her family sommarstuga to her Stockholm apartment (formerly occupied by August Strindberg).  The ritual of return seemed very familiar—exhausted child and parents bearing luggage and parcels into the house with thoughts still focused on the boat ride back to the mainland.

More unusual is the persistence of the summer home, the dacha, in Soviet society. In the days of the tsars, one might expect that the nobility and the emerging wealthy business class would seek a respite from city life. There is a romance about peasant life in the village that escaped many peasants who labored tirelessly in a subsistence economy.  Once the USSR eradicated private property, the leadership of the Party began to appropriate country homes for their own dachas. Lenin's dacha was hardly a summer cabin, but an elaborate mansion taken from the Gorki family and named Gorki Leninskiye. Stalin's dacha, Sochi, was in southern Russia on the Black Sea.  Lesser Party members also had their own dachas which were not only a retreat from urban life, but a place where they were free from constant Party surveillance.

Both Vera and Alla's families spent summers at their dachas, and it was fascinating and puzzling to hear about the bureaucratic maze the families had to negotiate to secure this privilege.  Both families' dachas were on the outskirts of Leningrad and accessible by electrichka--trams.  For both families the dacha was a place to grow fruits and vegetables to supplement their limited diet.  For both women it was also a place where they could talk freely and listen to radio broadcasts from the free world. Prying eyes were far away.

Stephen Lovell has delved into the history of the dacha in his book, Summerfolk: A History of the Dacha 1710-2000. Lovell is a Professor of Modern History at King’s College London.  He earned his PhD from the School of Slavonic and East European Studies at the University of London.  The title, Summerfolk, might lead one to believe this is a romance novel suitable for the beach; istead, it is a well-researched and well-written social and cultural history of the dacha. In fact, Lovell’s research is broader than most historians’ since his research extended beyond the usual primary sources like legal codes and memoirs.  Lovell ran a contest inviting Russians to write reminiscences of the dacha and includes remarks from their entries.

Alla and Vera’s descriptions of their dachas and the importance of their summer stays was clear and definitive.  Leslie and I had trouble understanding how those dachas came to “belong” to their families in a Soviet society.  I searched for a book that could explain the economics and politics of ownership and found Summerfolk.

My intention was to scan Summerfolk for the necessary information and then return it to the University of Minnesota Library. Initially, the architectural illustrations captivated me, and then I began to read from the beginning and was fascinated by the rich detail and very unique approach to Russian life and values.  It was only after I finished reading the entire book (280 pages) that I discovered Summerfolk is widely appreciated and highly regarded by Lovell's colleagues.  It won the 2003 Alexander Nove Prize in Russian, Soviet, and Post-Soveit Studies and the 2005 Award for Best Book in Literature and Culture from the American Association of Teachers of Slavic and East European Languages.

Over forty publications appear in the output section of Lovell's curriculum vitae.  Many are in-depth studies of cultural and social phenomena in Russian History like the use of radio broadcasts.  The most intriguing title to me is Bribery and Blat in Russia:  Negotiating Reciprocity from the Middle Ages to the 1990s published by Macmillan Press.

Although some of his academic works are narrowly focused, Lovell has written the premier concise, analytical history of the Soviet Union, apropriately titled:  The Soviet Union:  A Very Short Introduction.  (144 pages). Lovell examines the USSR by investigating the inherent paradoxes like the Soviet Union's borrowing of western ideas to modernize the peasantry while vilifying the West in its propaganda. This book does not present a long list of Soviet political leaders and their regimes like one could find in Wikipedia, but, rather, a thoughtful and insightful look at the Communist Party's approach to creating an ideology and a culture.

Were I still teaching Twentieth Century IB History, Stephen Lovell would appear on my syllabus.  Without the power to assign summer reading, I still can't help but recommend.  So, if you've figured out the plots to all the beach reading you accumulated for the summer, try diving into one of Stephen Lovell's books.