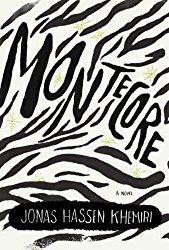 Jonas Hassen Khemiri has won more than thirteen literary awards in his thirty-eight years. After reading Montecore:The Silence of the Tiger, I am not surprised. This novel won the PO Enquist Literary Prize, Sweden's highest honor for a young author. Montecore was recommended to me by Professor Emeritus Roland Thorstensson of the Swedish Studies Department at Gustavus Adolphus College.I was researching Swedish attitudes towards immigrants as Leslie and I wrote about Alisa's move to Stockholm. This was the one book he suggested.

The book didn't look like a sociological study—it has adorable tiger stripes on the front.Professor Thorstensson seemed like a conventional professor—I thought it odd he'd recommend this book, but I plunged in and I didn't want to leave.

I felt as I did when I interviewed Alisa about her life as a new immigrant in Sweden, invited into another world.The invitation works best if all prejudices are suspended before entering. Although Khemiri is Swedish born, he covers  the emotional landscape of an immigrant in Sweden from his unique perspective as the son of a Tunisian immigrant and Swedish mom. What would have happened had Sweden shut its doors to immigrants? There would never have been a talent like Jonas Hassen Khemiri.

Khemiri has written a complicated, inventive and energetic novel that intertwines the past, present, and fantasy lives of its characters in a swirl of linguistic styles. If you dive into the book, you'll emerge with a sense of the complexity of the immigrant experience that no conventional language can truly capture.

From his novel it's clear Khemiri the author like Khemiri the protagonist of Montecore was not recognized as a genius from the moment of his birth. Khemiri has transformed his own convoluted path through childhood and adolescence and young adulthood into an original and compelling story that zips from one perspective to another all rendered in a mash up of languages and cultures.

If you need a break from the political talk in the U.S., but don't want to feel guilty about neglecting important issues like immigration, follow the advice of the prologue:

"Hello, dear reader, standing there skimming in the book boutique! Let me explicate why time and finances should be sacrificed for this particular book!"

…"Invest your ticket immediately in the book's journey and you will learn!"

The only thing better than reading Montecore would be hearing it read aloud.

Montecore: The Silence of the Tiger