April Book of the Month: A Gentleman in Moscow by Amor Towles 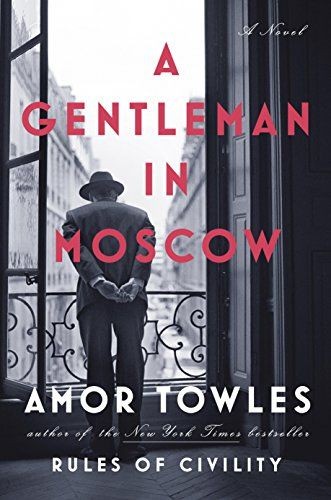 Once upon a time, an evil king sentenced a kind Count to life imprisonment in a sprawling palace. Formerly ensconced in his plush and gilded quarters the Count was to the drafty garret. Nina, a spritely young girl, rescued the count bringing him back to life in his reduced surroundings. Alas, he couldn't rescue the grown-up Nina from her fate in the frozen tundra. But twice from the confines of his prison, the Count rescued Sophia, Nina's talented and beautiful daughter.

Who would have believed that a fairy tale could be set in Moscow during Stalin's brutal regime? Towles's tone is light and elegant, but he doesn't shy away from the shadows lurking outside the Hotel Metropol where the gentleman resides or, more accurately, has been imprisoned indefinitely by the Communists for writing an allegedly subversive poem. The hotel is a refuge as well as prison for Count Alexander Ilyich Rostov, but the outside world blows into the lobby of the Metropol like a North wind when the doorman welcomes the outsiders across the hotel's threshold.

Towles deftly removes the count's privileges through his plot line and alerts the reader that facile stereotypes of an effete aristocrat, expert at arcane skills such as creating a seating plan for a formal dinner or knowing the correct flowers to send for each occasion, will be creatively deployed to further his survival and the survival of his friends. The count's impeccable aristocratic manners and mannered speech seem ill-suited for his life as a captive.The first indication that the count is not an innocent is the clever scene of the count stashing gold in the legs of his writing desk as he is forced to move from his suite to the servant's quarters under the roof. Towles manages a tour de force in setting virtually the entire novel within the walls of the Metropol Hotel without imprisoning the reader in claustrophobia.

One of the advantages of a novel is its ability to tell an important psychological or philosophical truth against a specific historical background. In Communist Russia from 1917 to 1989, individuals reacted to the rapid and frightening changes of life iwith a wide variety of responses. Some did attempt suicide like the Count but many persevered through famine, purges, war, and more purges. In Towles's novel, those who cope by forging friendships and demonstrating kindness are the "winners" and the heroes. They manage to carve a life overflowing with human warmth. Those who seek self-advancement and vengeance are the "losers" and the villains. Count Alexander Ilyich Rostov adapts and flourishes after his sentence of house arrest in 1922. As he did when he stashed his gold, the Count takes other measures to ensure his well-being. The key survival mechanism for the former member of the Jockey Club is building genuine friendships and relationships with staff and guests of the hotel. Adopting Sophia as his daughter is the pivotal moment in the Count's life, the moment when he assumes responsibility for another life and discovers his capacity for love and its power to sustain life.

You may wonder about the bizarre course of events and ask yourself—would a nobleman( belaya kost' ) return to Russia from Paris after the revolution? Were there people imprisoned in hotels? Could a little orphan girl be left when her parents were sent to Siberia? Was escape possible?

The reality is deftly presented in the non-fiction book I reviewed in November, Former People: The Final Days of the Russian Aristocracy by Douglas Smith( http://www.morejewishluck.com/easyblog/keep-up-with-vera-and-alisa-2/november-author-of-the-month-douglas-smith). By focusing on the Golitsyn and Sheremetev families, Smith offers a comprehensive and unromanticized portrait of the demise of Russia's nobility during the course of the Revolution. And it includes photographs. All aristocrats were labeled "former people" (byvšie lyudi) and all suffered at the hands of the Communists. There were instances of aristocrats fleeing to European capitals during the Revolution and its aftermath and there were some, like the fictional Count Alexander, who returned. Some were patriots and others returned to reunite with family members. Many of the former people were imprisoned and exiled, few were ignored as benevolently as Count Alexander. Some did live in straitened circumstances in a room or two of their palatial townhomes in Moscow or St. Petersburg. As life became more and more difficult, their connection to their palaces, their jewels, their stuff faded. For most it was books and portraits that they sought to save from the depredations of the marauders. Stalin was proven correct that the aristocracy could not become "new Soviet men" with their first loyalty to the State. Their loyalty was to their family. Smith also touches on the subject of possible escape and how dangerous it was for former people to speak to a diplomat or a journalist. It would be a short leap to an accusation of treason.

How Sophia became an orphan is a common story once Stalin's purges accelerated in 1936. In some cases both parents were sentenced to prison, exile, or death. In others, like Sophia's, one parent disappeared and the other parent went to uncover the fate of his or her partner. The child was left in "temporary care." Usually Stalin's bureaucrats confiscated not only the property of the accused, but also the children who were sent to State orphanages, a more effective place to indoctrinate children than a school. Children of "enemies of the State" bore the stain throughout their lives. Remaining alive and humane presented an enormous challenge for former people and their families.

Inspiration for this novel struck Amor Towles while staying at a Swiss luxury hotel. He realized some of the guests were residents. From there it was a short leap to plotting a novel with a protagonist under house arrest in a luxury hotel. The interview with NPR can be found at:

A Gentleman in Moscow flows easily from page to page. For me it became even more compelling as the outside world seeps into the Hotel Metropol and the fairy tale became an allegory. The former person Alexander Ilyich Rostov transformed himself into a mensch, a very good person.