October Book of the Month: Secondhand Time: The Last of the Soviets by Svetlana Alexievich 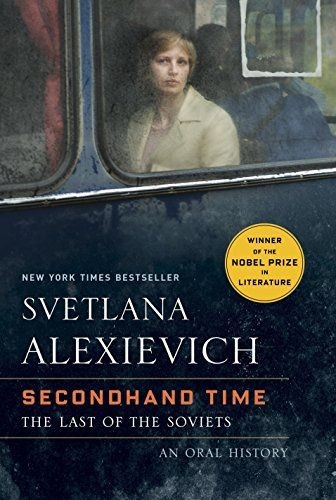 "The poetics of tragedy are important to me," stated Svetlana Alexievich,the Nobel Prize winner who creates a "novel of voices" from the stories of survivors.* She compiles a chronicle of trauma felt on a personal level.The peculiarity of the Former Soviet Union is that trauma was the norm, and the suffering was frequently perpetuated by the State on its own citizens. Alexievich has gone where angels fear to tread writing about children's memories of war, women soldiers who served in World War II, and witnesses to the Soviet-Afghan War and Chernobyl. Secondhand Time is a collection of reminiscence of responses to the demise of the Soviet world.

Recording these stories thirty years ago would have been a counter-revolutionary act by the author and the interviewees in a system that did not value individual stories; the prerogative to write history belonged to the Communist Party.Now, despite all the upheaval of the changes, through Alexievich's work, history belongs to the people.

Secondhand Time is an oral history of everyday citizens of the Former Soviet Union, of the kind I never met there except across a counter in a kiosk or office. These were not the people interested in mingling with Americans or idealizing the West. The author "sought out people who had been permanently bound to the Soviet idea, letting it penetrate them so deeply that there was no separating them.The state had become their entire cosmos, blocking out everything else, even their own lives." Russians she said, up to now, always lived for a great Idea.

So, what happened when the Great Idea teetered and then collapsed? To us Americans, Gorbachev was a hero. To many Soviet patriots, peers of our Greatest Generation [World War II veterans], Gorbachev was the "traitor of the motherland" and "Communism's undertaker." While we in the West were cheering for perestroika, the Soviet economy was not ready and certainly the ruble was not strong enough.Gorbachev made strategic errors including failing to gain support from the Communist stalwart.This resulted in people from his own Politburo attempting a coup in August 1991. Just four months later, in December 1991, the USSR was dead, destroyed from within.What follows is an era similar to an economic Wild West. The property and natural resources of the former USSR were up for grabs to the highest bidder or the first to claim it.This paved the golden path for the future oligarchs but left behind the majority.

The country I visited in the 70s was monochromatic and tightly controlled by ideology and secret police to enforce that ideology. By 2011, I noticed that the streets were more colorful, that people dressed more individually and dared to show affection in public. Billboard advertising was everywhere and the chic international stores, unaffordable to the vast majority of Russians, were now housed in the old Market.I assumed that freedom was positive for everyone. Alexievich has helped me see deeper into the psyche of the Sovok, the typical Soviet person, whom my friends would describe as "wearing blinders."

An octogenarian spoke for his generation: "We had a great empire—stretching from sea to sea…Where is it now? It was defeated without a bomb.Without Hiroshima.It's been conquered by her majesty Salami!...Mercedes Benz. .. Only bread and circuses for them!" He compares his generation of dreamers "We dreamt of worldwide revolution: 'To the grief of all bourgeois/Through the world, we'll spread the fire.' We wanted to build a new world where everyone would be happy.We thought it was possible…I've lived long enough to see the future we had dreamed of. The future we died and killed for.There was so much blood…Our own and other peoples… It's dangerous living too long.My time was up before my life could end.You have to die along with your era."He envied those that died young, with faith.There used to be a sense of the collective "we" rather than everyone out for himself. "There's loads of salami at the store, but no happy people.I don't see anyone with fire in their eyes".

The author underscores how World War II forged the Soviet psyche. "Freedom turned out to mean the rehabilitation of bourgeois existence, which has traditionally been suppressed in Russia…The darkness of desire and instinct—the mysterious human life, of which we only ever had approximate notions.For our entire history, we'd been surviving instead of living.Today, there's no longer any use for our experience in war in fact, it'd be best to forget it.There are thousands of newly available feelings, moods and responses.Everything around us has been transformed: the billboards, the clothing, the money, the flag…And the people themselves. ..After perestroika, no one was talking about ideas anymore—instead, it was credit, interest, and promissory notes."

As I write these words I imagine my friends and the heroines of our book, Jewish Luck, Vera and Alla, shaking their heads and tsk-tsking me, asking me why I'm wasting my time reading this book.I thought they would say the USSR was doomed to failure and was always corrupt. Here's Vera's  response: " I would never say that you are wasting your time reading this book, because if you want to get true and deep understanding what must happen to a human being to become something different, to lose most of his/her humanity and turn into Sovok, you must read this book. And, I guess you got it right!"

Unlike the vast majority of Soviet citizens, Vera and Alla always had access to Western ideas and beliefs.They were taught to recognize the lies.

The book is a difficult read and I did not complete it.It is unintentionally a study in trauma and there were so many kinds.It seems that there was no family without a story in the last two generations of trauma-neglect, deprivation, war, imprisonment.There was also the greater trauma of having to live through the betrayals, the constant changes in fortune, the fear of saying the wrong thing at the wrong time.But where there is terror, there are also perpetrators, and the State was able to commandeer plenty of people as accomplices.The State was the giver of all things – education, apartments, jobs, health care.The State was also the source of fear.It explains the tortured expression on Vera's face when I persuaded her to take me back to the courtyard of her old house, and she was repelled from entering, overwhelmed by grief for the unnecessarily difficult life her parents had survived in this home.

However, this is not what many interviewees remembered. They miss the old days of security and few choices and feel confused and demeaned by capitalism.  What is universal in these accounts is their loss of identity and purpose.

Despite the descriptions of trauma, Secondhand Time is also a book of resilience because each witness survived to tell his/her story and was heard.

Perhaps it was not only for the courage of Svetlana Alexievich's work, and for the beauty of the words, but it was also for giving voice to those who never had one, that she won the Nobel Prize for literature. For this reader, never one sympathetic to the typical Soviet citizen, I finally felt deeper empathy with what the Communist dream had meant, the profound sacrifice, and the current confusion and loss.

Leslie
28 June 2020
Earthquake
Wearily, I don my mask, my gloves for the weekly drive from my Minneapolis home to my suburban office to collect my mail. My footsteps echo in the empty hall. The calendar is still turned to March 2020 which means I have spent less than three months in this space that does not yet feel like my own. The March calendar photo of Little Paradise, New Zealand reminds me of my visit to an exquisite plac...
Read More

Leslie
07 April 2019
Mirror, Mirror
The date- April 15, 2018.The place- Minneapolis. The weather-15 inches of snow due to fall by the end of this day. The dilemma—Do I move the gilded mirror measuring 39" by 54" and weighing over 40 pounds from my sister's house to ours?I had delayed responding to the question—do I want this family heirloom—for a year and now Meryll was moving the next day.This forty pound heirloom seemed so much we...
Read More

Leslie
26 May 2018
The Regina Monologue or Feh! on Calling Me A Black Widow
When my mother was 8 years old, she had a "grandmother" for just over a year, the only grandmother she remembers.How did this happen? Grandfather Emil, a widower, lived with her family until 1937 when he was introduced to a "nice widow." Thirteen months after his wedding, Emil died at the age of 59.Cause of death? "Overfeeding by Regina," my mother said.Mom was sure that Regina was a " black ...
Read More