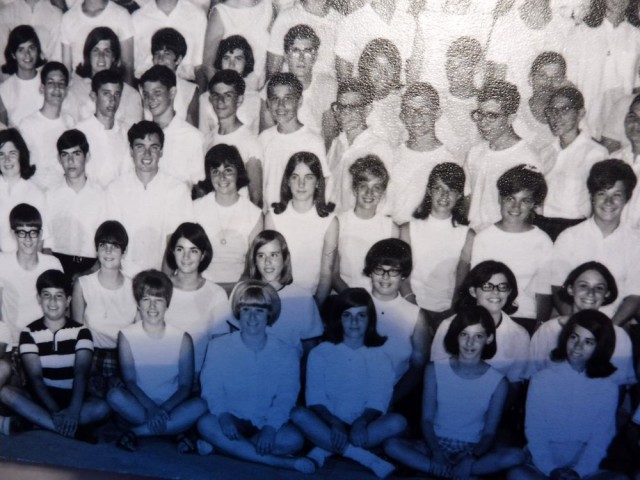 A trove of fifty-year-old memories popped into my email inbox last week. I couldn't open the email without remembering my insecure and lonely teenager-self. What I hadn't remembered was the email attachment, a small booklet entitled "Who is Man?" and the pride I felt with its completion.

The project engaged me during the fall of my sophomore year. It began as a seemingly off-handed suggestion from my USY (United Synagogue Youth) adviser, Label Waldman. I can still see him, feet crossed on his desk dangling his loafers as he suggested that our youth group's regional convention should provide outstanding learning. What if we included a packet of reflective and philosophical essays from members and not just an anthology of the usual experts (Heschel, Greenberg, Kaplan, et. al)? I can hear myself agreeing to contact some friends from camp and asking them to write an essay. Label offered a rabbinic quote for me to use: "A man reveals himself in three situations—the way he gives charity, the way he satisfies his physical needs, and through his temperament." It sounded better in Hebrew: בשלושה דברים אדם ניכר בכוסו בכיסו ובכעסו (B'shlosha d'varim ha-adam nikhar—b'koso. b'kiso, u'b'ka'aso.--Eruvin 65b).

The sight of the attachment took me back to the surge of enthusiasm I felt as I headed home already thinking who I'd write to, never anticipating a negative response.I remember calling my friend Sandi z"l in Dayton to ask for help formulating the list—almost everyone who contributed had been at Camp Ramah with us the past summer.

I was always ready for a distraction from my school world. In high school I neatly divided the calendar into time at camp and with camp friends and time awaiting the next camp session or conclave with camp friends.The hours spent at Hebrew High School and in USY activities throughout the school year were the highlights of each week.My most vivid high school memory is sitting in Latin class and crossing out another day on a notepaper I had pasted into my Latin book.It was my countdown until camp began in June. I had the outsider's ability to go through the motions of everyday life, but lived my interior life apart from school.The unexpected email evoked the intense and certain feeling that USY and camp were where I really belonged.

The email came from the youngest contributor to the packet--Sam-- whom I hadn't seen since 1967. Like many of us now in our 60s, he and his wife were setting the stage for downsizing by tossing out accumulated memorabilia. Among his papers was the mimeographed pamphlet "Who is Man?" replete with typos. Not only did Sam upload pamphlet to me, he sent it to one of the other authors, Ned, in Philadelphia.Now I was in touch with two friends from half a century ago.

In the grainy photo, Sam is seated on the extreme left three rows from the bottom. Ned is on the extreme right standing four rows from the bottom. I am guessing all three of us used social media to check the web for photos and see if we would recognize each other.It's a shock to see a face you remember as a 14 or 15 year old at age 65.I wonder what it would be like to retake the camp photo today—would we recognize each other?How many of us are missing?

Meanwhile, the emails with Ned began.He remembered almost every author in the pamphlet and filled me in on their whereabouts and professions.We caught up with each other as well and agreed we should hold a 50th Reunion for all those who went to Israel on our Ramah Seminar in 1968.

Of course, the spate of emails among Sam, Ned, and me also netted some added Jewish geography connections.Sam's sister-in-law was the recipient of my sister Leslie's hand-me-downs.Ned's second cousin is my mom's closest friend and was her maid of honor at Mom and Dad's wedding in 1948.I assume if more of us former campers convene, the connections will be even wider than these.

And, in case you're wondering about the quality of high school student's philosophical musings, they were superb and most of the authors were high school freshmen and sophomores.Maybe like me, the authors of these essays didn't experience high school as their "Glory Days" but USY and Ramah sowed the seeds for rich and rewarding lives in the following years.

Leslie commented that coming out of the postwar assimilation era, these organizations of the Conservative Movement—Camp Ramah and USY-- allowed us to have genuine connections to our identity and fully experience the possibility of a Jewish lifestyle and Jewish community even if only for a summer. Connections grew across years, space. and families. While our parents were busy being Americans, we connected deeply to our Jewish past.

Anyone up for a 50th Ramah Israel Seminar Reunion and a chance to renew those connections?.