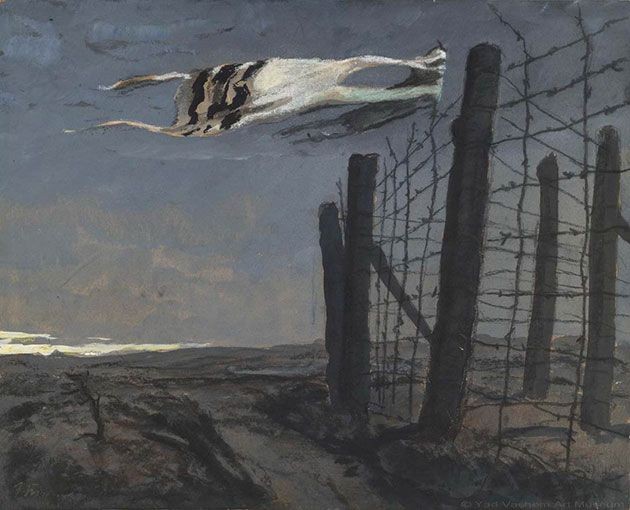 A slide flashes before the seventy artists of six Midwestern Jewish Art Labs.It's a tallit katan—an undershirt with ritual fringes flying like a flag from the barbed wire of liberated Auschwitz.Our lecturer, Professor Milton Katz of the Kansas City Art Institute, tells us it's the work of Zinovi Tolkatchev, a Russian soldier.

I'm awed by the power of the stark painting but I begin to wonder—a tallit katan?

No Nazi guard would have allowed that garment to remain.Did Tolkatchev stage the painting and use someone else's tallit katan?But, no Soviet soldier would wear a tallit katan beneath his uniform.

I mention my questions to Judy---do you think he was Jewish? Didn't he have to be to understand the meaning of the symbol?How else would he have even known of a tallit katan?I approach Prof. Katz and ask him whether Tolkatchev was Jewish—"I don't know," he tells me. "It's a good question."

I can't resist researching a good question. Indeed Tolkatchev was Jewish and was born in Belarus in 1903 before the Revolution—heart of the Pale of Settlement. His Bar Mitzvah would have preceded the Revolution. I can imagine him wearing a tallit katan as a small boy in the village of Shchedrin racing through the 95% Jewish shtetl of slightly more than 4,000.

By the 1920s when Zinovi was in his 20s, the Bolsheviks had overtaken the village and expelled most of its Jewish population.By 1926 only 1,759 Jews remained.

Zinovi became active in the Communist Youth Movement, fought for the Bolsheviks in the Civil War, and later joined the party. By 1928 he was teaching art in Kiev and mounted an art exhibit there in 1929 memorializing Lenin's death.Through the 1930s and the Stalinist purges, he was a book illustrator and managed to avoid the gulag.I assume his connection to his Jewish roots was strong. Even when Stalin reawakened anti-Semitism in the 1930s, Tolkatchev illustrated Sholom Aleichem's stories and showed his collection entitled "The Shtetl." I think he remembered the tallit katan. I believe it was part of his body even after he stripped it away after the 1917 Revolution.

Beginning in 1941Tolkatchev served as an artist in the Red Army during the Great Patriotic War with an assignment similar to American artists in the US Army Signal Corps during the two world wars. Tolkatchev sketched the liberation of Maidanek and then moved on to Auschwitz. His painting tells me he feels the horror without a single corpse or survivor to testify to the suffering and loss.It feels like a very Jewish painting.

After the war Tolkatchev published three albums depicting his experiences at Maidanek and Auschwitz which at first were well received by the Soviets. Stalin launched a second anti-cosmopolitan and anti-Semitic campaign and the book was censored. Tolkatchev was denounced as "the personification of detached cosmopolitanism and bourgeois nationalism." His works were labeled "Zionist-religious works."

Tolkatchev, however, escaped a death sentence and turned to less controversial subjects like portraits of Ukrainian writers.By 1965 he returned to the subject of Auschwitz and his album was reissued in Kiev. He died in 1977 in Kiev.

Here's what Tolkatchev said about his art of the death camps:

"I did what I had to do; I couldn't refrain from doing it. My heart commanded, my conscience demanded, the hatred for fascism reigned."

Although his comment could have been made by other Soviet soldiers, his painting is unique. His painting tells us he is a Soviet Jew.