Sunday Morning with a Gentleman Caller 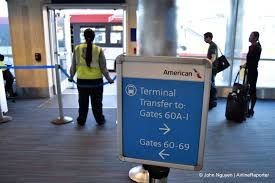 My alarm sounded at 4:45 AM last Sunday and adrenaline zipped through me.I laid out all the disaster scenarios for my 7:00 AM flight from Minneapolis to DC. Would I be TSA pre-cleared? Could I bring on the tiny tube of Hummus for my return flight? How long would the lines be?Of course I was early and could have slept another twenty minutes, but now there was time for coffee as I wedged myself into a seat in the American Airlines waiting area.For those of you not familiar with MSP, any airline other than Delta is considered a stepchild and relegated to the tips of the spokes. With six gates crowded at the end of the concourse all advertising flights at the crack of dawn, the area was throbbing with people, most looking zombie-like and sporting ear buds.

About fifteen minutes before boarding my flight, a man in his mid 70s, ample white hair fluffed like a halo around his head, turned to me before sitting down, gestured with his arm across the expanse of the gate area and said,

I responded, "Moo." That must have been the signal for him to relate his life journey before his flight to Charlotte.

"I'm on my way to South Carolina to see my girlfriend. It's a good story, maybe not for a major motion picture but at least for Hallmark channel. We met over fifty years ago."

The gentleman had turned towards me and I took a closer look.He was tall and learn, a dapper figure with his white duck pants, sports jacket and shirt.He gave the impression of rumpled elegance. I could see him starring in a Tennessee Williams play. Or maybe he was Tennessee Williams. I tried to imagine him as a teenager as he began to set the stage for his monologue.

"When I was a high school senior, my parents moved the family up to Duluth.I wasn't too happy about that.A guy in my class introduced me to Mary.She was a Proctor girl—about seven miles' distance on skis cross country and nine miles by car, not very close. But by the end of high school, we were going strong.We graduated and she went away to college.I went into the Army."

"We corresponded for a while and then I decided that Mary was the one for me. I wrote and asked her to marry me.She wrote back and told me she had a new beau, a West Pointer.I was outranked—what could I do?My bunkmate asked if I'd gotten a 'Dear John letter' and I told him, no it was addressed to me."

"After the army, I apprenticed with a terrific Duluth architect who took me under his wing.I applied to architecture school, too, and loved it.I married and had two sons. My wife died not too long ago.So, I started making sculptures to give away to people so they'd remember me when I died.Then I realized I hadn't made Mary a sculpture and I certainly wanted her to remember me."

"I had someone locate her for me, called her on Valentine's Day and the rest is history.Her husband had died and we couldn't stop talking. I was curious to know how she looked after all these years.She told me her sister weighed 300 pounds and before I could ask anything about her looks, she told me she was 200 pounds lighter than her sister.She was always an itty bitty thing and still is. What can I say?The years have been good to her.In April we flew off to Paris together.It was wonderful—April in Paris—you must know the song.I fly down to South Carolina about eight times a year now."

To test the strength of the relationship, I asked if Mary ever flew to Minnesota in the winter.

"Oh, sure. She's a Proctor girl, you know. She comes every February in her short red dress, and we go to the St. Paul Hotel for dinner. It's very romantic.We travel back and forth, but I don't think we can get our families together. Marriage isn't in the picture. She has two sons; they're both PhDs.I have two sons and they're both bouncers. I just tell her, 'my boys can beat up your boys.'"

"There's my flight. Aren't you coming with me to Charlotte? We can keep on talking."

"DC? Are you in Congress perhaps? No, you're too good a listener."  He chuckled and strode away to his rendezvous leaving me feeling like I had indeed just seen the premiere of a new Hallmark movie.