The Wildest Inauguration Ever 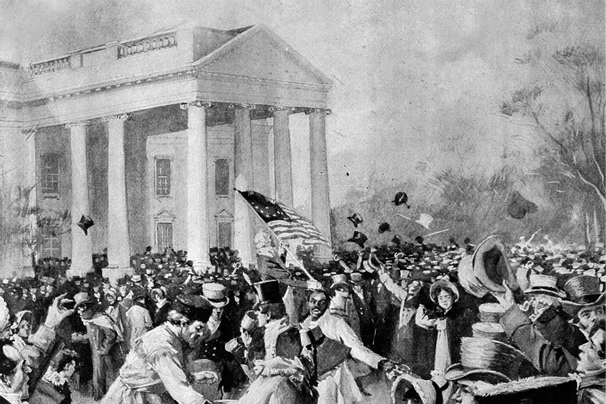 What do Alec Baldwin and Daniel Webster have in common? Inaugural dread.

In 1839 Daniel Webster described the hellish situation in DC. The crowds who showed up for Andrew Jackson's inauguration were "like the inundation of the northern barbarians into Rome…They really seem to think that the country is rescued from some dreadful danger." Strong words from the eloquent New Hampshire senator.

I'm afraid of the incoming administration. Perhaps you are as well. I'm fearful of the swagger, the tweeting trigger finger, and the unraveling of civility and tolerance. Reading newspapers and talking to like-minded friends and family do nothing to assuage my fears.So, I turn to history. Join me for a look at one of our worst presidents—Andrew Jackson (D). Jackson was an Indian-hating, Supreme Court flouting, slaveholding, dueler. Jackson fought 103 duels before he became president. If you think of duels as tweets in action, you can see the analogy to Trump's personality.

Until 1828 most presidential campaigns were sedate. With the inclusion of non-property holding white males, the electorate expanded. Like Trump, Jackson knew how to work up a crowd. Partisan newspapers spread his wild accusations of secrecy, corruption, and intrigues in the swamp of D.C. Sound familiar?

Jackson positioned himself as the champion of the average man although he ranks as our sixth wealthiest president (Trump will bump Jackson down to seventh wealthiest). His net worth in today's dollars is estimated to be $119,000,000 derived from the labor of more than 100 slaves on his 1,000 acre plantation.

The opposition campaign sank to personal accusations. Jackson was labeled a "bas...d", his mother called a "prostitute", and his wife characterized as an "American Jezebel". Tough talk for the 1820s. The more the Republicans vilified Jackson and his wife, the more sympathy he garnered from the voters. In many voters' eyes Jackson was a hero who battled the shrewd and unscrupulous elite. He won the election with 178 electoral votes to incumbent John Quincy Adams's 83.

One month after the election Jackson's beloved wife Rachel died. Jackson blamed Republican vitriol for her demise. Three months later, clad in mourning garb, Jackson delivered an unremarkable inaugural address to a raucous crowd estimated to have been between 20,000-30,000.

The somber Jackson didn't dissuade his supporters from unrestrained revelry. Once they reached the White House, his supporters tore through the mansion in their muddy boots, knocking over anything in their path, standing on the furniture, and jostling for refreshments. Jackson withdrew. When the White House steward moved the punch bowls and liquor outside, the crowds retreated from their depredations inside the official presidential residence and took the party outside. A guest remarked it was a "Saturnalia of mud and filth."

Did Jackson's term of office set the U.S. on a more democratic course and drain the swamp? Not really--especially if you ask Native Americans. He ignored the Supreme Court and ordered the implementation of the Indian Removal Act exiling 46,000 Native Americans who lost 25 million acres of land. An estimated 4,000 Indians died along the Trail of Tears.

On the threshold of an inauguration and a new presidency, we can't predict the future. Even if our new president joins the ranks of "the worst," U.S. History reassures me that the Constitution will endure and the pendulum will swing in a new direction.

Historical consolation is not enough. We can't set our clocks for four years hence and wait out the Trump presidency. This is a time for action—let's not wait to see if the Trump administration succeeds in fulfilling all its campaign promises. Leslie is marching in D.C. on January 21. You can take Meryl Streep's advice and find one organization that speaks to you. Meryl's suggestion to her audience--the Committee to Protect Journalists. For more ideas, see Charles Blow's article laser focused on anti-inaugural action preparation (https://www.nytimes.com/2017/01/05/opinion/the-anti-inauguration.html?emc=eta1&_r=0). Replace that inauguration dread with the "yes we can" spirit.

A Little March with Big Repercussions