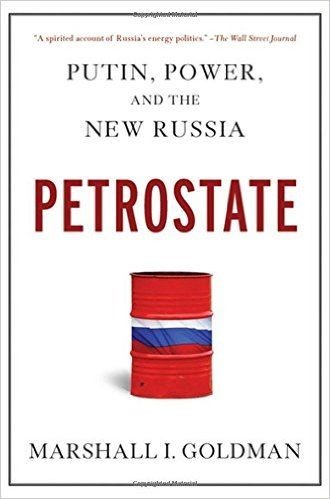 Although Petrostate: Putin, Power and the New Russia. (Oxford: Oxford University Press, 2008) has little to do with Jewish Luck, Leslie and I read Marshall Goldman's economic analysis of Putin's impact on Russia's economic growth since he took office as prime minister in 1999 and president in 2000.Goldman's question is a good one and although it is now 2017, Putin is still riding the wave of popularity in Russia based on his turnaround of Russia from the dark days of the financial collapse in 1998.

Marshall Goldman is the Kathryn W. Davis Professor of Russian Economics, Emeritus, at Wellesley College and Senior Scholar at the Davis Center for Russian and Eurasian Studies at Harvard University. Professor Goldman was Leslie's professor at Wellesley—another good reason to profile his book.

Not only has Professor Goldman written extensively about Gorbachev, Yeltsin, and Putin, he has met them and was in Moscow during the August 1991 coup attempt. He lectured in the USSR in 1977 and in the 1980s. His current project studies the impact of the Russian mafia on economic reforms in the former USSR.

Goldman's conclusion: "Russia would be very different, but that rapid economic growth would still be there, Putin or no Putin."

He bases this conclusion on the fact that Russia's economy is based on its oil and gas production, hence it's a petrostate. Vera understood that gaining a toehold in the privatization schemes of the 1980s and 1990s would be the pathway to success. She avoided oil and gas because she also understood that the oil and gas industries were the mainstay of the Russian economy and would be the most likely industries to be reappropriated by the government.

Putin did just that. Oligarchs like Berezovsky and Khodorovsky assiduously put together their own empires based on oil and gas revenues and attempted to use their economic power to influence the political system.  Putin began to advocate "national champions" and the renationalization of oil and gas concerns. In his book, Goldman notes that Russian state control over gas and oil rose from 10% to 50% between from 2000 to 2007. Meanwhile Berezovsky is dead and Khodorovsky was jailed and stripped of Yukos in 2003. Rosneft, the state owned Russian oil company which absorbed Yukos, is headed since 2010 by Putin's confidant, Igor Sechin. Like Putin, he is a former KGB officer.

Today Rosneft and Gazprom are the engines of the Russian economy. "Putin made a difference," Goldman repeated, "but oil and gas made an even more important difference." Goldman's book is now nine years old but the issue of Russia as a petrostate is not over.

What happened to Meryll's blogs?

The Cossacks Are Coming

Being Mindful of Mindlessness: From the Personal to the Political