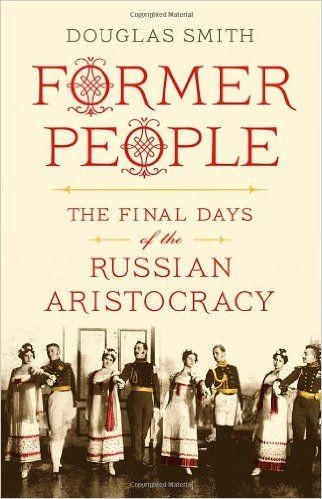 In his prologue to Former People:The Final Days of the Russian Aristocracy, Douglas Smith explains how a paté fork led him to his 400+ page work, Former People:The Final Days of the Russian Aristocracy. (New York:Farrar, Straus, and Giroux, 2012).While this is a daunting work of non-fiction detailing the fall of the Russian aristocracy in general and two noble families in particular, it's a gripping work for those fascinated by Russian History.Smith is a meticulous researcher and a good storyteller similar to three of my favorite authors, David McCullough, David Laskin, and Doris Kearns Goodwin.It's no easy task to wend one's way from pre-Revolutionary Russia to the death of Stalin in 1953 and help the reader keep all the strands of the story in her hand.With the help of family trees, maps and clear prose, Smith is able to accomplish the task.Don't expect People Magazine or Country Life.

Photos offer a poignant overview of the precipitous fall of the princely Sheremetev and Golitsyn families.The cover photo of a ball at the Golitsyn Palace overlooking the Fontanka Canal in St. Petersburg before the Revolution presents a line up of four couples in their elegant finery who seem haughty and soulless. No smiles and no joy emanate from the photo. A haunting photo of Pavel Sheremetev, his wife, Praskovya (née Obolensky) and son Vasily at the Novodevichy Monastery around 1930 presents a thin and haggard family, still together.In the background one sees the elegant pillars of the monastery and babushkas peering from behind like two Fates.In a 1943 mug shot Eli Trubetskoy (née Golitsyn) stares straight ahead with her clear eyes, her thin lips pressed together making her appear fearless. The Butyrki Prison photos identify the former princess with Cyrillic letters arrayed like a scrabble game denoting her birth year, surname and place of birth.She was 54 years old when she died of typhus in prison.

Smith's text begins with context, an absolute necessity before plunging into the chaotic years of the Revolution, Civil War, NEP, Lenin's crackdown, and Stalin's assumption of total and arbitrary power. Smith's comparisons to the French Revolution are helpful to those of us more familiar with the pendulum swings from 1789 until Napoleon's assumption of power in 1799 France.

Focusing on the fates of the Sheremetev and Golitsyn families, Smith recounts their transformation from privileged to hunted, from belaya kost'(nobility) to former people (byvšie lyudi). And lest you think Smith concocted the term, "former people," he provides the origin of the term in 1917 and its use as a legal lever to humiliate and exterminate members of the former nobility. Smith presents the different reactions of various Sheremetevs and Golitsyns to the Bolshevik Revolution and subsequent uncertainty and chaos. Some choose exile and some choose to stay.Some are stuck. Despite the accusations that the multi-lingual aristocrats' passports overflowing with entry visas to all the fashionable European destinations were not true Russians, it's clear their connection to their Motherland was a deep and spiritual one.Among those who remained, their writing and the reminiscences of their living relatives are filled with references to their religion.As life became more and more difficult, their connection to their palaces, their jewels, their stuff faded. For most it was books and portraits that they sought to save from the depredations of the marauders. Stalin was proven correct that the aristocracy could not become "new Soviet men" with their first loyalty to the State.They all remained loyal to their family first. Smith cites countless examples of the odysseys of parents seeking imprisoned children in the gulag, wives tracking their husbands in exile in the Asian states. Families hoped for decades that their relatives would emerge from a prison or exile only to discover Stalin's cruelty in refusing to acknowledge the deaths of prisoners in the gulag.

As a Jewish woman reading the anti-Semitic comments of some of the aristocrats that was part and parcel of their mindset, I felt like at times like I'd been punched in the gut. Smith does not whitewash the belaya kost', presents the aristocrats as they were before and after the Revolution in his masterful work. It's not surprising Douglas Smith was the first recipient of the Pushkin House Russian Book Prize in 2013.

April Book of the Month: A Gentleman in Moscow by Amor Towles