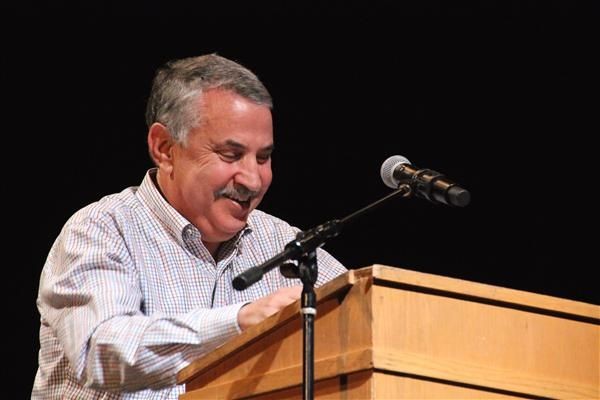 What do the Coen brothers, Sharon Isbin, Al Franken, and Tom Friedman have in common? They were all raised in our Minneapolis suburb of St. Louis Park and we're justly proud of our roster of celebrities.Our celebrities tend to be known for their intellectual acumen and talent rather than athletic prowess. St. Louis Park residents have followed hometown celebrities long before there was a "follow" button or even an internet.We elected Al Franken to the U.S. Senate, but no celebrity is more respected for his opinion than Tom Friedman and nowhere is his fame more touted than within the walls of St. Louis Park Senior High.

When I first walked into my history classroom at St. Louis Park Senior High and began to arrange my desk, I pulled open a file drawer and wedged in the back was a history essay written by Tom Friedman.Feeling a bit guilty to be peeking at his private thoughts intended only for my predecessor, I still read the essay from start to finish.Well done, Tom!That essay –probably vintage 1970—made me feel like I belonged in St. Louis Park.I now had a Tom Friedman story.

Friedman spoke last spring at St. Louis Park Senior High to a packed room including former teachers, classmates, and aspiring journalists as well as locals who read every op-ed and book Friedman writes.This past week Tom Friedman wrote about the danger Vladimir Putin poses to the world. (http://www.nytimes.com/2016/10/05/opinion/lets-get-putins-attention.html ). In case you're not a rabid Friedman fan, he has written two other articles on the dangers Putin poses—one on 9/14/16 (Donald Trump's Putin Crush) and 9/21 (Two Ex-Spies and Donald Trump).

Vera spoke to Leslie and me about the ominous Putin when we began interviewing her for Jewish Luck.She hasn't stopped. Vera intuited the threat Putin emanated when she first met him at a city council meeting in Leningrad in 1989.As he rose to more and more power, Vera was careful to remain out of the spotlight of the political sphere as more and more of the successful businessmen of the New Russia had "accidents" or were charged with crimes.She left Russia knowing it was in the hands of someone who clutches onto power. We've written blog after blog on Putin's insidious hold on Russia.Now that Tom Friedman has lent his voice to the alarm, the danger feels even more present.

To summarize, Friedman begins with a counterfactual situation envisioning a scenario where U.S. intelligence operatives would turn the tables on Putin and launch their own hacking offensive against the Russian government.Friedman's ploy to draw us into his thoughtful essay that underscores the danger a rogue leader presents to the U.S. and the world. In Friedman's words:"Putin's behavior in Syria and Ukraine has entered the realm of war crimes, and his cyberattacks on the American political system threaten to undermine the legitimacy of our next election." Friedman presents a mountain of evidence to demonstrate to his readers that Putin is more than a fulminating short guy in a nicely tailored suit.We've been ignoring the threat Putin poses as if he's the two bit leader of Freedonia poised on a stallion with a raised sickle urging his countrymen to demonstrate their strength.

Friedman draws the logical conclusion from the facts—"We're going to have to step it up."

It's taken us Americans longer to realize what some Russians have known for decades. Thank-you, Tom Friedman, for laying out the topography of aggression.

And kudos to Marge Bingham, Mim Kagol, and all Tom Friedman's St. Louis Park teachers from 1968-1971.Tom Friedman knows how to write an essay!

Driven Crazy by Putin or Driven by Crazy Putin

Why Everyone Hates Putin (Except Putin and Colbert)

Weighing in on Nemtsov's Murder